The first stop was the Rickshaw tour through the Hutong area in Beijing.

This is one of the most famous and was used during the Olympics to house some of the athletes. I believe that only part of the tour group went to the Zoo yesterday and the other part of the group went on the rickshaw tour. We heard that they were very aggressive and racing each other. We hoped to see the same kind of action today. The other tour had a later start and went straight to the Temple of Heaven where we would meet up with them.

We stopped at one of the houses. Each “house” is made up of a collection of indoor rooms and separate bathroom with a shared courtyard.

The owner owns the entire plot, so the houses and the courtyard. The value is estimated to be upwards of a million dollars as it is well preserved and maintained. The owner gave us a brief history and introduction to the area and his property while the tour guide translated. Many of the rooms have air conditioning as well. All the rooms have power and they have some modern amenities like a fridge, TV, etc.

We then toured around the area in the rickshaws and made our way back to the starting point.

The next stop was the Temple of Heaven. It is often very crowded on the weekends and major holidays as many people will come here to pray. We were there on a weekday so it wasn’t crowded at all. This is where the King/Queen used to come to pray for good luck and good harvest.

There is an admission fee for many of the larger parks in China. They sell passes to their residents for about 20-30 dollars a year and they are well kept. Usually older people will come here to exercise and socialize in the morning before running errands later in the day. We came here a bit too late to see the morning exercises. The other part of the group was here earlier and saw the morning exercises.

Entrance to the Temple of Heaven.

We took a group photo in front of the Temple. As you can see in the below pictures, some couples have their engagement or wedding photos taken here.

Below is the Imperial Hall of Heaven. Click on the picture for more information.

Below is the East Annex Hall.

This was the exit out of the Temple of Heaven and back into the public park area. They have signs warning you that if you leave, you cannot come back in without paying again.

The next stop before dinner was at a Tea house. Upstairs, we had lunch. Everything was included so no need to pay for these activities. They gave an introduction to different types of tea and also how to brew it. The store sold various things, including tea, tea pots and other tea related items. I bought a mug that had decorations on the Great Wall to commemorate the marathon.

Before the dinner, the bus dropped us off a few blocks away from our hotel at a large shopping building. This building is a collection of small stands that sold various items, from clothing to fake electronics to Chinese souvenirs. There will be many store owners trying to get you to go into their shop. They are not too aggressive as they will move on to the next person behind you. Since these areas get crowded, make sure to be aware of pickpockets.

For tonight’s dinner, we went to another restaurant to have Peking Duck. I thought the duck was ok for this place. It was served with traditional white flour steamed buns with some sauce and garnish. I personally had better in the US. If you really want good Peking Duck, I would recommend looking at the following links to see if you can go to these places instead. As the itinerary changes from year to year, ask beforehand which restaurant you will be going to for Peking Duck as they may have changed it to some place better. I may make another trip just to try different places of Peking Duck as the restaurant we went in to in 2012 was lackluster.

Personally, I have heard from a few other bloggers about the place at the Grand Hyatt on Chang’an Avenue, called Made in China. It is #3 on the china.org website. I have never been here as I stuck with the schedule. You can also watch them prepare the duck for you and also have seen this place mentioned on TV.
This blog wasn’t where I heard about this restaurant, but it does a great job describing the experience. According to the blog, the duck costs 200RMB, which isn’t too bad. Its definitely expensive, but they said it was well worth it.
//www.tinyurbankitchen.com/2010/10/made-in-china-grand-hyatt-hotel.html 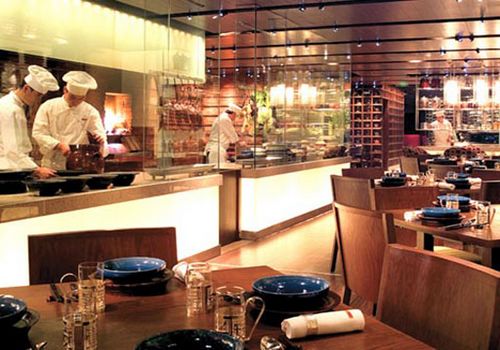 Made in China Peking Duck

We had saw a sign for Hooters Restaurant on our bus ride to the Temple of Heaven. After dinner, me and two other runners decided to check it out. This was definitely not scheduled on our tour. I checked all the maps and found a route to get there by train. It was only a few stops away.

I guess having a massage parlor next to a Hooters is a bit redundant.

I knew nothing about Hooters but one of the other runners suggested the wings as this was their specialty. We also each tried one of their signature drinks as well. The food was good and the drinks were reasonable. On the top of every hour, the waitresses would sing and perform a dance. I can’t remember what they sang but they were decent.

After the dinner, I noticed that it was too late to take the Metro so we decided to walk back to our hotel. We definitely saw some interesting things but none of the pictures came out as it was really dark and all I had was my camera phone. We made it back safely as there was almost no one on the streets. I kept checking my phone to make sure we were going the right way. Again, I used Google Maps.