The Sheraton Tribeca is a recently opened hotel and you can still see the signs of newness – rooms are in great shape, bathrooms are near picture perfect, common areas are updated and don’t show any signs of wear or tear yet. But at the same time, the staff also seems new – it was hard to get a question answered (I was transferred to 3 people before getting an answer), I was not recognized as a Platinum member of the SPG program, was not told about the concierge lounge or any other benefits.

My experience with check in was less than idea. I arrived and was greeted by the front desk staff. She began the check in process and then answered a call. Instead of telling the caller she was with a guest, she stayed on the phone and helped them – for about 10 minutes – before getting back to checking me in. When I suggested to her that perhaps she could put them on hold and finish what she had started with me, she was rude and sarcastic with her answer.

My room was as small as a shoebox, but it’s Manhattan, what else do you expect? The room was very clean and in like-new condition since the hotel is still so new. The bathroom was also small, but the shower was nice and had great water pressure. There was ample space for things like hair dryers, bath products and plenty of plugs. The layout of the room was a bit odd – but not horrible. If you weren’t careful, you could trip over yourself. The view from the room was spectacular and the window opened just slightly – a new perk if you enjoy the “fresh” air.

I ordered room service on my first night since I got in so late (they’re only open until 11pm) and there were very quick. The order wasn’t correct when it arrived, but they immediately fixed it and were very pleasant and helpful. The food was average – about what you’d expect from room service – and very expensive.

Since I wasn’t informed about the concierge lounge at check-in I inquired the next day and was told about the 21st floor lounge. I visited at the end of the day for and was very underwhelmed by the appetizers they were serving – cold, shriveled cocktail hotdogs and something that looked like a mini-quiche but tasted nothing like it. I was equally disappointed by the breakfast options – Hampton Inn’s breakfasts are better. Frankly, the Element at Times Square (Starwood’s new Eco Chic brand inspired by Westin) offered appetizers and breakfast that were 10 times better than the Sheraton Tribeca and you could get the same thing the Sheraton offered in the concierge lounge at a Hampton or Holiday Inn. The only beverages offered in the lounge during my stay were coffee, tea, Coke Zero, Diet Coke and Wine. No water.

Aside from the disappointing food in the lounge, the space was laid out well, had ample seating and several computers. The best part of was the outdoor patio/deck with seating, umbrellas and a remarkable view of the city. The lounge would be a great place to meet with colleagues or relax outside.

Another great plus for this hotel is its proximity to great restaurants like David Burke’s Kitchen – a short block away – and many other sidewalk cafes, trendy restaurants. There is a subway station ½ block away from the hotel entrance and cabs were pretty easy to catch.

Checkout was quick and easy and the concierge was very helpful with directions. The bellman hailed a cab – which took about 5 minutes – and loaded my luggage.

I’m not sure if I would choose to stay at the Sheraton Tribeca again. I enjoyed the fact that it’s very new and clean, but there was nothing special about the hotel that would draw me back. I would personally rather stay at the Element – which is also very new, has larger rooms and better benefits.

View from the Sheraton Tribeca 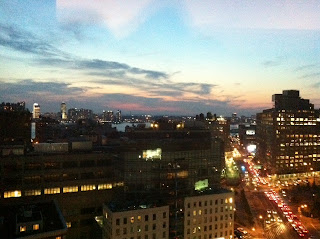 Iraq On Your Bucket List? Starwood’s Got You Covered

Starwood HQ moves to Dubai and Westin’s on a Tangent