Graze Charleston describes itself as creative, casual cuisine – and I’ll give it that, the menu was creative and offered a variety of choices from fish to pasta to pork. We dined on a Saturday night, and had made a reservation at 8:30 for a party of two.

It took about 10 minutes to be greeted by the host – the restaurant was packed and people were congregated everywhere. The bar was very noisy and on this Saturday was hosting a very large party with Woo-Woo girls (if you don’t know about the woo-woo girls, you must check out How I Met Your Mother.)
We were seated just in front of the kitchen and heard all the bathroom and kitchen traffic – next time I’d request a seat in the front of the restaurant.

Our server was not very knowledgeable (I ordered a cappuccino and she said we don’t carry those here – it’s milk and coffee, there’s nothing to carry. Maybe I’m being tough, clearly she meant they didn’t have a machine to make cappuccino, but then just say that) and she was very soft spoken – given our location, that meant we had to ask her to repeat the specials several times.

We started with the Spicy Tuna Tataki appetizer with scallions, spicy bean paste and cucumber salad with crispy wonton skins, tobikko and pickled ginger mayo. I did not really enjoy the Spicy Tuna Tataki – the tuna was cut on the thick side and the bean paste was very spicy. The wontons added a little crunch and the cucumbers added much needed acid to an otherwise uninspiring dish.

I ordered the Hearts of Romaine Caesar and was brought the Graze salad. After I sent it back, the Caesar arrived and was very good – and quite large for a starter salad (I would suggest sharing this.) For dinner, I ordered the Wild Mushroom Pappardelle with Split Creek Farm goat cheese, spinach, pine nuts, wild mushrooms and truffle oil. The dish was very, very heavy even though there was a small portion of goat cheese sitting atop the dish. The sauce was thick and creamy. The mushrooms and spinach were very good and the pasta was good as well. I had expected a lighter dish given the description and was a little disappointed with the dish – I couldn’t find the truffle oil.

My friend ordered the Pomegranate BBQ Grouper with Smashed Pea Risotto and Grilled Summer Vegetables. She enjoyed the fish, but wasn’t overwhelmed. The desserts were not on the menu and had to be read several times by our server. Since it was so loud – thanks woo-woo girls – I had a hard time hearing and so we asked for her recommendation. She suggested an amaretto brownie. The brownie didn’t taste home-made and there was no sign of amaretto anywhere in that dessert – so I wonder if we misheard her (but that’s what we both thought we heard) or it just wasn’t a great dessert.

In the end, I would definitely give Graze another chance – I’m going to chalk this one up to a very busy night, an overwhelmed staff and some crazy woo-woo girls. 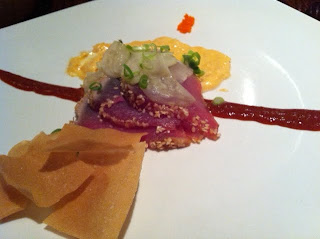 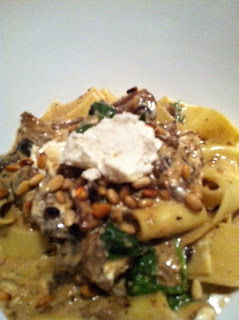 Be the first to comment on "Graze Charleston – restaurant review"