Hotel rates in Sydney – and all of Australia for that matter – are shocking during high season (Australian Summertime = US Winter) and so I ended up at a Holiday Inn Potts Point paying $198 AUD/night (about $203 USD at the time of this posting) – pricy for a Holiday Inn!

After more than 38 hours of travel, 1 day in Germany and a 4-hour layover in Thailand I arrived in Sydney at 7am and discovered was rush hour down under really meant. An hour in a cab – without air – and I was at the Holiday Inn. My keys were ready when I arrived at check-in and oddly enough, no one asked me for any identification or credit card.

I inquired about what my newly acquired platinum status got me, and I was told that it ensured my keys were ready at check-in. I asked if it got me free internet, and I was told no – internet was $27.50 AUD per 24-hour period with a maximum of 250MB of data (after that, there was an additional fee). I asked if I got free water in my room with my platinum status and I was told no, but that the tap water in Sydney was drinkable (US tap water is drinkable too –I just choose to drink bottled water) . There was no executive lounge/concierge lounge and no free breakfast (breakfast was $29 per person for a continental buffet)

I arrived to my room which had a spectacular view of Sydney Harbor and the Opera house. It was actually breathtaking – and I presumed that may have been a benefit of Platinum Status. The room was large with one king bed and a small chair. The carpet was old and had an odd smell about it (like they had cleaned it, but I never really dried properly) but otherwise, the room was very clean. The bathroom looked like it had been redone recently. It was large with a large bathtub & shower. The water pressure was great in the shower. I was pleasantly surprised by room – it was much better than I had anticipated it would be.

The hotel proved to be quite conveniently located and was directly next to the Kings Cross Train Station. I was only in Sydney for three nights – and so the Holiday Inn was adequate. I am not sure what the real benefit of Priority Club membership is. Compared to Starwood Preferred Guest (I’m Platinum) and Marriott Rewards (I’m gold) Priority Club seems to be the least rewarding program. This is my only Holiday Inn or IHG hotel during my 5 week trip – and I have to say – I’m kind of happy about that. I’ll stick to Starwood and Marriott. 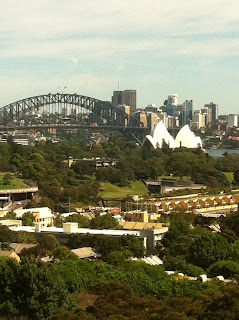