Every year my entire family goes to Walt Disney World in Orlando for a family vacation. Growing up in Florida, I went to Disney often. But seeing it now through the eyes of my niece and nephew is quite a treat – and worth the endless days of screaming children and grumpy parents. The resort sits on a 43-acre wildlife preserve featuring 30 species of wildlife. Looking out your window and seeing giraffe and zebra is quite a unique and special experience. Part of Disney’s Animal Kingdom, the hotel offers quick access to the pack and busses to the Magic Kingdom, Epcot, Hollywood Studios & Blizzard Beach.

The Kidani Village is the newer of the two Animal Kingdom Lodge hotels. The rooms are African themed with a touch of Disney thrown in. We had a 2-bedroom, 3-bathroom suite. The suite ranges in price from $800 – $1300 per night depending on the day and season. They say the suite sleeps 9, but that would be extremely uncomfortable. The master suite has a king size bed with a very large bathroom featuring a spa tub and shower (pictured below.) The living area has a full kitchen, dining table that can sit 6 comfortably (if you had 9 people someone would be eating on the floor!) a queen size sofa bed and twin size sofa chair. The living room also had a full bathroom, which was for a large group. The second bedroom had one queen size bed and one queen size sofa with a small bathroom.

The beds are the most uncomfortable beds of any hotel I’ve ever stayed in (and in 2011 I had over 200 nights in hotels). The sofa beds were like planks. I would never sleep on one of them again…I would rather pay for an extra room or bring an air mattress. On the flip side, they pillows were very comfy.

The reason to stay at the Animal Kingdom Lodge is for the view of the animals and proximity to the parks. I’ve stayed at the Contemporary Bay Lake Villas (in 2010 & 2013) and a suite at The Walt Disney World Dolphin Hotel (run by Starwood) (in 2009) and the Animal Kingdom lodge was the least comfortable, but one of the most exciting & kid friendly hotels. The Contemporary Bay Lake Villas are more comfortable and closest to the Magic Kingdom and the Dolphin is the most comfortable and closest to Epcot.

The restaurant choices in the Kidani Village are limited – there’s only one and it’s not cheap. The Jambo House has the majority of the restaurants including Jiko – The Cooking Place a highly rated and highly priced restaurant, Boma – Flavors of Africa a very busy buffet (also pricy) and the Mara – a quick service African inspired restaurant which also features standard American fare like burgers and kids choices.

Disney’s Animal Kingdom Villas – Kidani Village has been designated by the Florida Green Lodging Program, recognizing the Resort’s environmentally responsible practices. They changed the linens and towels one time during a 5 night stay. There are ample recycling options but I didn’t see any other visible “green” practices.

Next year when we make our annual trek to Disney I don’t think we’ll be staying at the Animal Kingdom, but I would recommend anyone experience it at least one time. Unless you have a trip to Africa planned, the chances of seeing these types of animals up close is highly unlikely and worth the trip.

View of the Savannah at the Animal Kingdom Kidani Villas 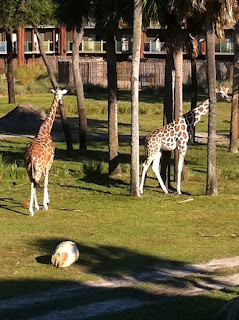 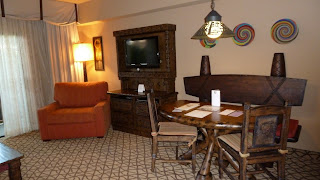 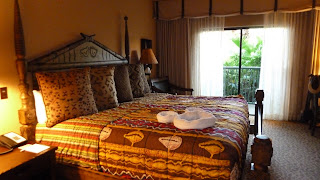 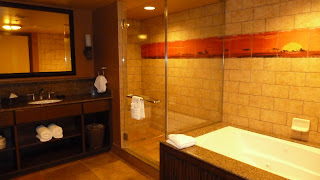 Walk The World – Or At Least Walt Disney World

Magic Kingdom’s Be Our Guest Restaurant

Be the first to comment on "Disney Animal Kingdom Lodge"