Back in June of 2011 I had the most amazing meal at the Phoenician Scottsdale at celebrity Chef Jean-Georges Vongerichten’s J&G Steakhouse. So when I went back to the hotel this past week for a frequent traveler event, I was looking forward to the experience and hopefully amazing meal.

J&G sits atop of the Phoenician hotel, on the 5th floor, and offers spectacular views of the mountains and sunsets. The restaurant offers several dining options including a special Sunset Fixed Price Menu.  To my amazement, the menu last week was almost exactly the same as the special “neighborhood menu” offered in 2011.

As in 2011, this time I started with the Asparagus and Goat Cheese Salad with Grilled Mushrooms and Vinaigrette. This was a good as I remembered it being.  The asparagus was fresh and crunchy and the mushrooms were tender and full of flavor. 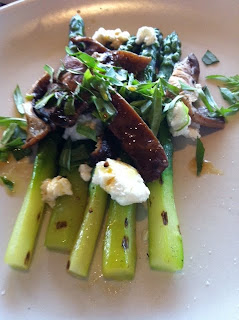 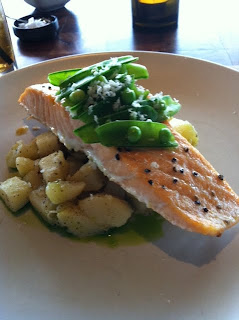 Both in 2011 and 2015 the meal was capped by a sinful and decadent Warm Chocolate Cake dusted with house-made Caramel Ice Cream on a bed of salt. When you cut into the warm chocolate cake, the center oozes with melted chocolate. 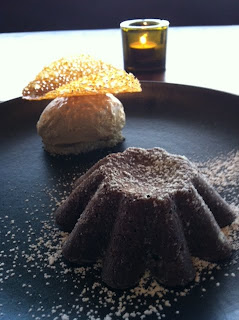 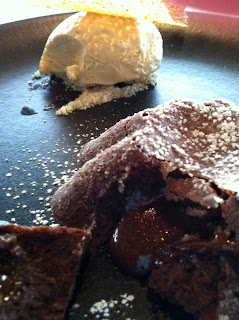 In 2o11 the meal cost $35 for 3 courses, today, in 2015, the meal cost $40 for 3 courses.  Unfortunately, the service was not nearly as exceptional as I remembered.  Our waiter last week was flat out rude and clearly was unhappy to be waiting on a larger group (we had reservations for 2 tables, a party of 8 and a party of 4. The party of four ended up being 6.)  At the table of 8, the waiter ignored simple requests for iced tea or soda. He rolled his eyes when no one ordered wine. The service was so bad, in fact, that I spoke with the management at the end of the meal.  The other restaurant staff was wonderful, and I told them that, but the waiter himself left a very bad impression.  If that had been my first visit (and for many in my group it was their first visit) I wouldn’t have returned because the service was just that bad.

While I loved my meal, now and then, a few people who ordered steak had mixed experiences.  One person sent back his steak because it was well done, not medium-well.  Another ordered medium but got medium-well, though he didn’t send it back.  Some people absolutely loved their steak, so I can only imagine the cooking issues were due to the larger group size.

VegasUncork’d 2014 by Bon Appetit: A Weekend To Remember

I Ate Kangaroo And I Liked It