slightly adapted from an email i wrote to my parents, who are planning a trip there. (i’ve been to berlin three times, the earlier two while i was living in germany: 2010 (for a concert), 2007 (met up with a friend), and 2006 (for loveparade).)

what to do in berlin

the hemispheres 3 perfect days is actually pretty good, and then just add a day trip to potsdam as your fourth day, information here. a note for dad — the dome of the reichstag is open in the evenings as well if he wants to get up there for nighttime shots of the city. just be prepared to wait in line for a bit (day or night). in my opinion, checkpoint charlie is skippable. if you want more on the berlin wall i highly recommend going to the memorial, //www.berliner-mauer-gedenkstaette.de/en/ and the ghost stations exhibit in the nearby s-bahn station //www.berliner-mauer-gedenkstaette.de/en/geisterbahnhoefe-558.html. the 3 perfect days has potsdam listed on the last day, i think, so instead of that, do this instead and move potsdam to the fourth day.

i’ve stayed in the ku’damm one which is by the shopping street and easy to get to from by public transit. they just opened the one at the main train station (where you will be pulling into) if you want that sort of ease. that’s that Hauptbahnhof (“main train station”) location.

be sure to book from FRA FrankfurtAirport to Berlin Hbf. also, remember the pop-up calendar for date picking starts on a monday, so don’t be confused. you will not be able to book until 92 days out, but it’s best to wait until 92 days before your return trip because (at least the last time i bought tickets) the 50% off price (not sure what they call it in english, but in german it’s sparpreis 50; there’s also a sparpreis 25 for 25% off) requires a round-trip purchase (so basically you’re buying a round trip ticket for the price of a one-way). remember that if you buy a sparpreis ticket, you will be locked to that particular train, so if you miss it, you will have to buy a full price ticket at the station (and forfeit whatever you spent on the first ticket).

if you print your ticket out at home, just bring the printout with you as well as the credit card you used to buy the ticket. you will need to show both to the conductor.

don’t forget to reserve seats. you will be arriving during rush hour and there may be commuters going to berlin.

also, you will need to transfer at least once if you want to take a high speed train (there is a direct non-high speed train that takes 30 minutes longer but it leaves pretty late, around 8 AM). i would not recommend booking a ride that involves an “S” train (suburban rail) because you will have to transfer at the frankfurt main station and you will have to make your way from underground to ground level in 10 minutes, which is doable but if you don’t know where you’re going it might be dicey.

here is, i think the ideal one for you. Fernbf = fernbahnhof = long distance train station. the first train just takes you to the main train station — you may get a reserved seat on it but it’s not worth finding and settling down in just for a 10-minute ride. you will see that they give you the platforms already, so you know which one you will need to change to.

i’m sure you will remember the following from your past train rides, but just to be complete: if you have time, there will be signs on the platform that tell you where to stand (i don’t know if you remember from the last time we took the trains there). you find the car number on your reservation, look for your train on the chart, and find your car. the letters at the top correspond to signs along the track. here’s a sample one i found online: 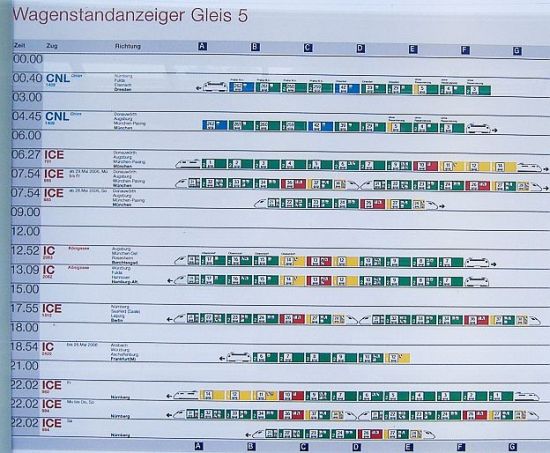 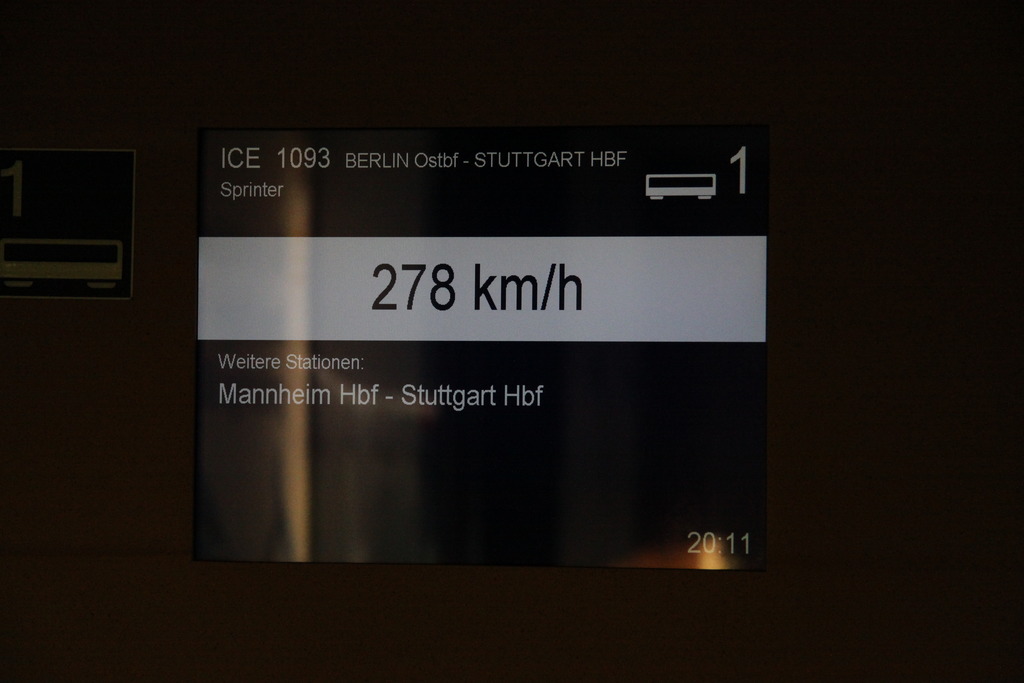 ok, i think i’ve said all i wanted to say, but maybe more will come to me.

Phlashback: Surfing in Munich (not me)

Be the first to comment on "Ramblings on Berlin"