i wouldn’t call myself an architecture fanatic, but there are certain “starchitect” (it pains me to use that term, but it fits) names you hear so often you can’t help but be intrigued. this is especially the case of Zaha Hadid, who i first heard about from architecture friends a handful of years ago in London (me at the time: *nodding like i knew who she was*).

the more i investigated her and her designs, the more captivated i became. the mixture of elongated and blocky, the blatant futurism, and the audaciously fluidic and branching interiors — there’s no architect whose work i wanted to see in real life more than her. (i’m sure i saw the London Aquatics Centre when i did a quick walkabout of the Olympics site a couple years ago, but only from a distance, so that doesn’t count — plus, it looks unimpressive from pictures.)

the MAXXI Museum (National Museum of Art of the 21st [XXI, get it?] Century), as i learned from one of those friends who introduced me to Hadid, was not to be missed, both as a fan of modern art and modern architecture. i wasn’t planning on going, but it was close enough to the Galleria Borghese, which i did this morning, to do a whirlwind walkthrough before having to get back for work. i’m glad i did, not only for the architecture but for the strong exhibits. i spent almost about an hour and a half there, though you should easily devote at least double that, especially if there are lots of video pieces, as there were today.

sidebar: galleria borghese everyone was saying i should go, and while there are a few clear must-sees (the villa and rooms themselves and several works by Bernini), on the whole it seemed a bit overhyped. however, if you enjoy old-school (and i don’t mean that in a derogatory way) art, it should be one of your top destinations. remember to buy your tickets beforehand because you are only allotted a certain 2-hour time slot to access the museum; get there about half an hour before your slot begins. you will need the alphanumeric “pick-up code” from the confirmation email to get your ticket, no printout necessary. guided tours (glad i did that) are 6,50 € and start at 10 minutes after the beginning of the time slot, minimum of two people needed (luckily a couple from Washington signed up, or i would have been out of luck). they say they allow a maximum of 360 people in per time slot; there seemed to be a lot less than that today. low season for the win!

you can get to the Galleria Borghese via the 910 bus from Termini (Pinciana-Museo Borghese stop), and continuing on that bus will take you to within a block of the MAXXI (Flaminia-Reni stop). you can also get to MAXXI by Tram Line 2.

i have always been a bit skeptical of Hadid’s designs, but the elongated forms she likes, as it turns out, are quite conducive to linear storytelling and presentation, which suits this sort of museum well. the ramps, though, make for quite a bit of walking, although they help to build anticipation and, frankly, look cool. 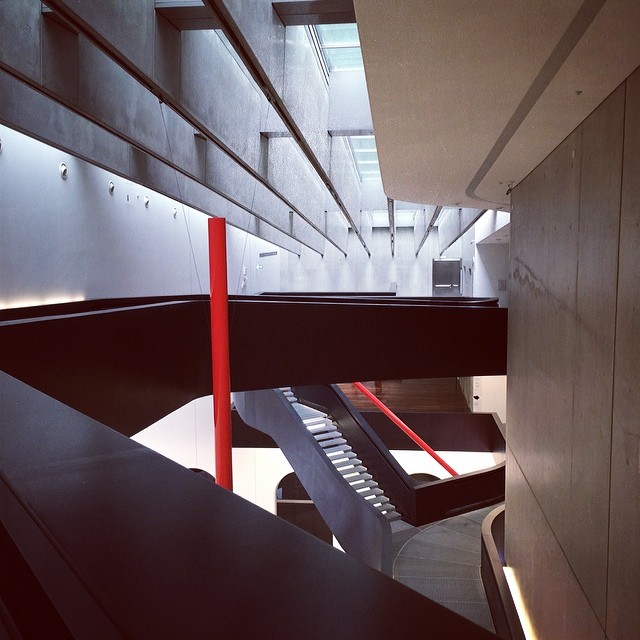 given what i saw today, i’d rather have spent my time at the MAXXI than at the Galleria Borghese, but that’s just me. if you’re a fan of modern, though, MAXXI is well worth a visit.

The Bardo Museum: A Great Museum OR THE BEST MUSEUM?

Be the first to comment on "Instawalk: The Futuristic Lines of Zaha Hadid’s MAXXI Museum"