my previous exposure to South Africa was when i came for work in 2011 — i spent a couple days in Johannesburg, the rest of the week in a small town (but big agriculture trade show) in rural Free State, and then four days on safari in Sabi Sand. i actually didn’t think i would ever come back to South Africa (this was well before i even considered constant travel as a permanent feature of my life) but had kept hearing how Cape Town was worth a visit. Cape Town in the distance, taken from Robben Island

well, i finally made it, and i discovered what i heard wasn’t just true, but that it ended up being a city i could see myself living in — a fairly short list. not (necessarily) just nice to visit or my favorite places, but something more — a place that actually resonates with me.

but why? certainly many cities have all of the following, but there’s some sort of intangible magic about it all that enchanted me. as an aside, it reminds me a lot of Portland (Oregon, not Maine), a city i love as well.

keep in mind i’m only basing my decision on a week’s worth of time in there, so maybe i’ve been lucky that what i experienced was so great.

it’s got a stunner of a backdrop (and frontdrop)

from the ocean to the mountains it’s just a couple of miles — and what mountains! Table Mountain with its indescribable “tablecloth” and Lion’s Head rising up behind the city — amazing. The view from my Airbnb in the Tamboerskloof neighborhood. That’s Lion’s Head on the left.

you’re surrounded by Mother Nature’s handiwork. every morning i looked out the window of my apartment and saw Lion’s Head. walking down the street to the bus stop, there was Table Mountain to the right. i don’t think that could ever get old. i was talking to the owner of a restaurant i was at on my first day there while admiring the billowing tablecloth cloud formation and she said she often likes to sit out on her balcony and just watch. i don’t blame her!

located at the southern tip of the African continent, the waterfront (whether you’re at The Waterfront or just on the water) is also gorgeous. it. has. it. all. (ok, i will admit there are parts of the water that are really…pungent. blech, like what i’d imagine if a whale died and started rotting, but just keep moving a bit and it’s gone.)

Next to the bus stop at the V&A Waterfront

as a California native, diversity is something i value. My local cafe — “We speak Afrikaans” and what I assume is “We speak Xhosa”?

that said, i’m not going to pretend i even come close to understanding the history of ethnic relations in any country, let alone South Africa with its very troubled past, and i can’t speak to how life truly is on a day-to-day basis for the non-White majority (84%, says wiki) (and i suppose, conversely, how life is for Afrikaners) in the post-Apartheid era, but i love how so many people are multilingual, and the fusion of indigenous, European, and Asian cultures is pretty damn cool. this is especially true when it comes to food. oh for the love of melktert, biltong, and bobotie! it’s a nice change from the Mexican and East Asian i’m surrounded by in California — not that i’m complaining about that at all, though. i can’t wait to get home to a nice wet burrito!

sidebar: the scars of Apartheid are definitely things to learn about if you visit, although i am very curious as to how things are today, a couple decades after its end. Bunk beds in the prison on Robben Island, an island prison that was the home of many freedom fighters, including Nelson Mandela who was there for 18 years. A dompas (literally “idiot pass”) — an internal passport that non-Whites were required to carry at all times which restricted their movement and had to produce if any White person asked to see it.

or, as one of the guides on the township tour would say, “it’s got vibe!” while everyone knows i’m not a hipster, there are tons here (which i can’t say i don’t appreciate, since i think it keeps cities on their toes — if not in a perpetual eye-rolling state), and it was selected as a World Design Capital for this year.

the central part of town is small enough to be walkable (well, the verge of, as i’m not really a big walker), and the new MyCiTi bus system (put in just a number of years ago and still expanding, although its contactless fare card is horribly slow and inefficient) makes getting around town relatively painless. i have a feeling, though, that during rush hour it’s oversaturated. i saw a number of buses that basically didn’t stop for passengers anymore because they were too full, and there are stations where there are queues for certain popular bus lines. it’s pretty cheap, though, with rides of up to 5 km costing about $0.40. Central Cape Town from the top of Table Mountain

regardless, as the primary city on the west coast, it’s large enough but not overwhelmingly so.

oh! last year they introduced UberX, so that helps a lot when you don’t want to deal with all the potential pitfalls of taxis. i won’t go so far as to say Uber is problem-free (i hear horror stories of UberX in San Francisco back home), but my experience was pretty positive. i used it to get from the airport to the Airbnb, and the driver told me that the per-kilometer charge is cheaper than that of a taxi, although you also have time-based charges with Uber he conveniently didn’t mention (which i luckily knew about). 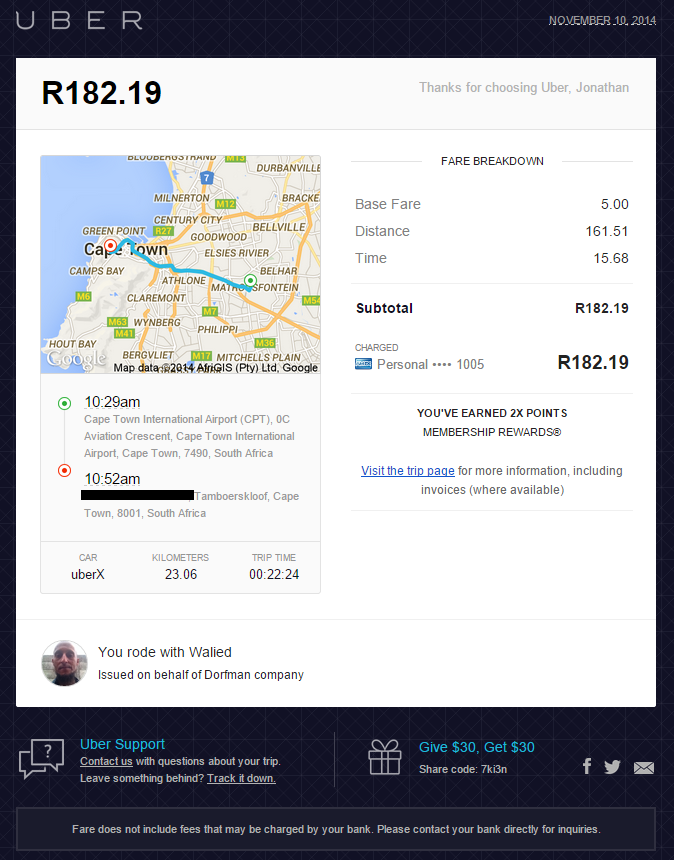 as an expat, this would be a big bonus if i could somehow keep earning dollars and not rand. it’s not great news for locals who want to travel abroad, though. when i was last here in July of 2011, it was approximately 1 dollar to 7 rand — now my dollar buys about 60% more! my morning flat whites and a light breakfast (yogurt and granola, for example), at pretty hip cafes around town ran about R40, or about $3.60.

Go dollar go! It’s similar, I hear, with the euro and the pound.

internet is relatively slow here — as is the case with the country as a whole. it should be noted that Namibia, a neighbor to the north, has on average faster internet speeds. my 4G phone service was much speedier than the DSL connection at the Airbnb.

worse — and more serious, though, is the (still) high level of crime. there are many parts of town that you’re advised not to walk through at night, and i’ve heard stories from three people (including one local, a guide on my township tour) who reported being chased down the street by muggers, and at least in one case, a mugger armed with a knife.

that said, i never felt unsafe wherever i was, although i’m not sure how much weight or merit that should be given, as i was only out and about during the daytime, in busy parts of town (though i get the impression that muggings happen at all hours, in all locations). the locals as a whole seemed genuinely friendly and honest. maybe this is one of those times when i choose to be blindingly optimistic, but i stand by what i feel.

oh, and that accent

i just need to take a moment and profess my love for the South African English accent, something i remember enjoying being surrounded by when i was here for work those years ago. one thing i’m obsessed with is how they emphasize the “as” in “as well”, so it’s intoned a bit more like how you’d say Caswell.

you can hear “as well” in this older video about the MyCiTi bus system: (it’s around 2:40)

oh swoon! (heh, what i don’t really care for is how many pronounce short “i” like ooh, so “fifteen” sounds like “fouefteen”. well, you take the good, you take the bad.

i’ll leave you with a South African parody of one of my favorite songs, Rebecca Black’s “Friday” — this is “Braaiday”! (a braai is a South African barbecue — and you know how i love to eat!)